I am a lifelong food & wine enthusiast – I’ve worked in product development for Hotel Chocolat, I looked after the Food & Drink categories at notonthehighstreet.com and I’ve been the Buyer for hampers at Harvey Nichols. In my free time, I am a bit of a geek – I love doing research, distance learning courses, and reading, and if I can combine any of those activities with my love of wine, then even better! When I started writing our first blog, what I wanted to write about was the great revival of English wine, and share with you all the reasons why English wine is booming again.

I got a tad distracted from that. As I said above, I’m a bit of a geek. My favourite subject at school was History, and it’s still something I love learning now.

So I wanted to share with you some of my favourite findings. (And I will make sure our next blog post covers the original topic of the English wine revival!).

In Great Britain, while we’re huge consumers of wine, we’ve historically been very minor producers – around just 1% of wine consumed in the UK is made by British producers.

But what’s the history of English wine? Why are we seemingly so late to the wine-producing party that our European neighbours have been dominating for centuries?

Here, I take a look back at the history of English wines…

The foundations were laid a long time ago….

Vineyards in the UK have been recorded throughout history.

Growing grapes for the purpose of making wine in Britain is thought to be something introduced by the Romans when they invaded England. The Roman Empire had a profound impact on winemaking in various other countries they invaded – notably France, Portugal and Spain – and of course, it was a pivotal part of Roman culture in Italy. Wine was something drank by people from all walks of life, from slaves to peasants to the elite – it was part of daily life in the Roman Empire. I read a passage about how wine was seen as a “democratic” drink – it knew no hierarchy, no one didn’t have access to it; drinking wine was as close to a constitutional right in the Roman times as freedom of speech is to us today. (I quite like the sound of being democratically entitled to drink wine…) There is mixed evidence that during the Roman occupation of England & Wales, the climate was more akin to the rest of Europe, with warmer summers that make grape growing somewhat easier.

Once the Romans had left, England & Wales found that whilst wine still had a place in everyday life, it held a sacred position in people’s religious practises – the rise of Christianity and the practise of drinking wine during Holy Communion cemented Britain’s demand for wine. The Black Death in the mid-1300’s was a significant knock for the English wine industry. Vines require long term commitment, and do not yield quick results. Many landowners swapped their fields of vines for fields of crops that gained them a quicker return. Still, a number of vineyards prevailed…

You may know about Henry VIII, but did you know just how much impact he had on the demise of the British wine industry?

In 1509, when Henry VIII came to the throne, there were more than a hundred vineyards in England, 11 of which supplied the royal household. The connection between religion and winemaking (above) led to many vineyards in England being attached to monasteries.

Every history fan has their favourite era – mine is the Tudors. Whilst I knew all about the dissolution of the monasteries in 1536, what I didn’t realise is that it led to the closure of a significant number of vineyards. Monasteries had vineyards attached, to grow the grapes needed to make communion wine. No monasteries = no vineyards! 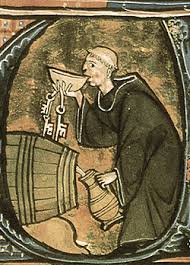 The dissolution of the monasteries is frequently blamed for being one of the single biggest causes of the decline of the British wine industry. However, by that point, French wine was well established in England, having been made popular by Henry II and Eleanor of Aquitaine some 380 years earlier.

The rise of French wine’s popularity coincided with a change in the British climate – summers became cooler, winters became wetter. It became harder to get a good quality harvest, and to protect vines from various types of fungal diseases. This meant that in the 1700s when England imposed high tariffs on French goods (including wine), the natural alternative was to look to Spain and Portugal for wines, rather than making them on home soil. Europe was cemented as England’s preferred supply route of wine.

When politics ruined it all… (Again!)

England’s climate improved slightly towards the mid-late 1800’s, and this could have led to a revival in viticulture, had it not been for a trade deal struck with Europe, that led to a drastic reduction in import tariffs = a significant decrease in the cost of imported wines. For anyone thinking of making wine in the UK, the cost of it would have now been grossly un-competitive vs imported wines.

Fast forward to the early 1900’s – England’s climate is still improving vs the previous few hundred years (in relation to grape-growing conditions that is!). Surely post-industrial revolution, we would be ready to revitalise our formerly great English wine industry!

European politics played a huge role again. World Wars I and II meant that all farming land was needed to grow crops and livestock and preserve Britain’s food sources.

In 1951, the first commercial vineyard was planted at Hambledon in Hampshire, England, and the revival of English wine started!

Read the next blog to find out about what happened next…! (I promise not to get sidetracked next time!)